Fragile weapons and armor cannot take the beating that sturdier weapons can. A fragile weapon gains the broken condition if the wielder rolls a natural 1 on an attack roll with the weapon. If a fragile weapon is already broken, the roll of a natural 1 destroys it instead.

Masterwork and magical fragile weapons and armour lack these flaws unless otherwise noted in the item description or the special material description. 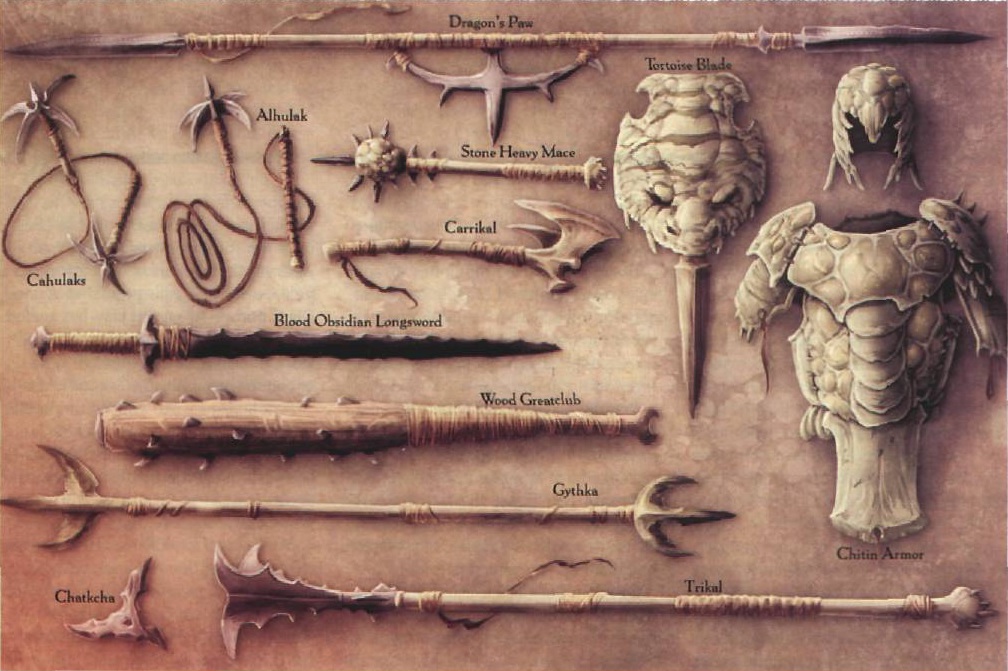 Bone can be used in place of wood and steel in weapons and armour. Other animal-based materials like horn, shell, and ivory also use the rules for bone weapon and armor. The cost of a bone weapon or bone armour is half the price of a normal weapon or armor of its type.

Armour Studded leather, scale mail, breastplates, and wooden shields can all be constructed using bone. Bone either replaces the metal components of the armour, or in the case of wooden shields, large pieces of bone or shell replace the wood. Bone armour has a hardness of 5 and has the fragile armor quality. Masterwork bone armour also has the fragile quality, but magic bone armour does not. The armor/shield bonus of bone armour is reduced by 1, but in the case of studded leather, the armour check penalty is also reduced by 1 (to 0).

For simplicity’s sake, similar or component metals such as brass, copper, or even tin can use the following rules, even though in reality bronze is both harder and more reliable than those metals.

Armour Bronze can be used to create any medium or light armour made entirely of metal or that has metal components. It protects a creature as well as steel armour does, but it has the fragile quality. Bronze armour has the same cost and weight as normal steel armor of its type. Bronze armour has a hardness of 9.

Weapon Items made from chitin are either cobbled together from natural pieces or refined and shaped through various alchemical processes. They are relatively cheap, but not particularly strong compared to objects constructed of metal. Chitin weapons take a –1 penalty on attack and damage rolls (minimum 1 damage).

Weapon Any wooden or mostly wooden item (such as a bow or spear) made from darkwood is considered a masterwork item and weighs only half as much as a normal wooden item of that type. Items not normally made of wood or only partially of wood (such as a battleaxe or a mace) either cannot be made from darkwood or do not gain any special benefit from being made of darkwood. The armour check penalty of a darkwood shield is lessened by 2 compared to an ordinary shield of its type.

Weapons Obsidian can be used to craft light and one-handed weapons that do piercing or slashing damage, as well as spear tips and arrowheads. Obsidian weapons have half the hardness of their base weapon and have the fragile quality. Obsidian weapons take a –1 penalty on attack and damage rolls (minimum 1 damage).

Armour The fragile glass nature of obsidian is perfect for creating sharp points and blades, but those same qualities make it unsuitable for creating armour. Armour cannot be constructed from obsidian.

Weapons Light and one-handed bludgeoning weapons, spears, axes, daggers and arrowheads can all be made of stone. Weapons made of stone have half the hardness of their base weapons, and have the fragile quality. Stone weapons take a –1 penalty on attack and damage rolls (minimum 1 damage).