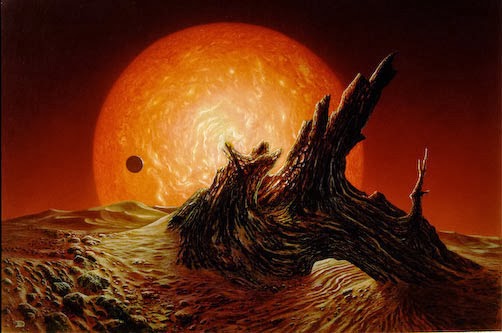 The Athasian sun is a punishing ball of fire that beats its fury down on the parched land below. As the sun rises the heat intensifies until it can set fire to paper and cook flesh.

Hot
In this temperature band, unprotected characters must make successful Fortitude saving throws each hour (DC 15, +1 for each previous check) or take 1d4 points of non-lethal damage. Characters wearing heavy clothing or any kind of armour take a -4 penalty on their saves. Characters whose protection against heat is at least level 1 (such as the Heat Endurance feat, or wearing desert clothing) are safe at this temperature and need make no checks.

Severe Heat
In this temperature band, unprotected characters must make successful Fortitude saving throws once every 10 minutes (DC 15, +1 for each previous check) or take 1d4 points of non-lethal damage. Characters wearing heavy clothing or any kind of armour take a -4 penalty on their saves. To be completely protected against severe heat, a character must have at least protection level 2 or higher (such as having the Heat Endurance Feat and wearing desert clothing). A character with protection level 1 is considered partially protected and such characters must attempt this saving throw only once per hour.

Extreme Heat
In this temperature band, unprotected characters take 1d6 points of lethal damage per 10 minutes (no save). In addition, unprotected characters must make successful Fortitude saves (DC 15, +1 for each previous check) every 10 minutes or take 1d4 points of non-lethal damage. Characters wearing heavy clothing or any kind of armour take -4 penalties on their saves. In addition, those wearing metal armour or coming into contact with very hot metal are affected as if by a heat metal spell (which lasts as long as the character remains in the area of extreme heat). A character must have protection level 3 or higher to be protected against extreme heat. Level 2 is considered partial protection, and such characters take damage and make saving throws once per hour instead of once per 10 minutes. Level 1 provides no protection.

Dehydration
As the body loses fluids, biological processes begin to break down. This leads to a drop in pallor, shaking, nausea and eventually a complete collapse of the nervous system. Though dehydration can occur in any environment, the combination of high heat and low humidity in waste environments makes it an omnipresent threat there.

In the heat of Athas a character must consume 4 litres of water a day to avoid dehydration. In particularly hot environments above 30°C characters need double the amount. The amount of water required to avoid dehydration increases by a further 4 litres per temperature band higher than hot. A creature can go without water for a number of hours equal to 24 + its Constitution Score. After this point, the creature must make a successful Fortitude Save (DC 10, +1 for each previous check) or take 1d6 points of non-lethal damage. In particular hot environments (those above 30°C) the time a creature can go without water is reduced.

Sunburn
Sunburn is a serious hazard when travelling in the waste. A mild sunburn is merely distracting, but more severe burns can be life-threatening. Avoiding sunburn requires covering up exposed skin, wearing hats or robes, or carrying a parasol. Beings native to torrid climates have developed dark skin pigmentation to protect against the sun. Of course, wearing heavy clothing carries its own risks (increasing the likelihood of succumbing to heat stroke), and sunlight reflected from light-coloured surfaces can still reach beneath a hat or shade.

Characters who take even minimal care to protect their skin from sunlight are not subject to sunburn. Wearing a desert outfit is also sufficient. If a character is out in the sun unprotected, after six hours the character is mildly sunburned and takes 1 point of non-lethal damage. After a further six hours exposure the character develops severe sunburn and immediately takes 2d6 points of non0lethal damage and a -2 penalty on Fortitude saves to avoid damage or fatigue from heat dangers until the non-lethal damage is healed.

The following conditions or protections help to mitigate of completely alleviate the penalties of extreme temperatures.