“Mind of a child, strength of three grown men. I’ve seen a half-giant tear the walls out of a building because he wanted a better look at the tattoos on a mul inside.”
―Daro, human trader 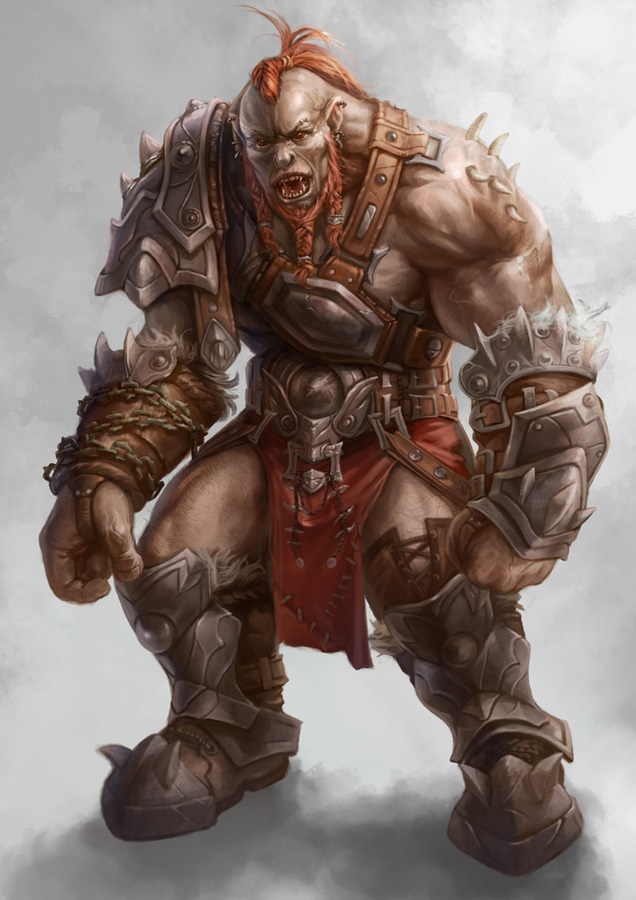 Legend has it that in ages past, a sorcerer‐queen used wizardry to beget a union of giant and human in order to create a race of powerful slaves. Whatever the truth of this legend, the half‐giant race has increased in number and is now fairly common especially in human controlled lands near the shore of the Sea of Silt. Half‐giants gain great strength, but dull wits, from their giant heritage, and are nearly as agile as their human forbearers.

Personality
Because of their artificial origins, there is no half‐giant culture, tradition or homeland. Half‐giants readily imitate the customs and cultures of their neighbors. Half‐giants often display curiosity, a willingness to learn, and a general tendency towards kindness.

Physical Description
Physically, the half‐giant is enormous, standing about 11 1/2 feet tall and weighing around 1,200 pounds. Half‐giants have thick hair, which is often kept braided (especially among females) or in a single tail that hangs behind the head and down the back. They dress in garb suitable to their occupation or environment. Half‐giants mature at about 24 years of age and can live about 170 years.

Relations
The most powerful warriors on Athas, halfgiants seem content to dwell in humanity’s shadow. Halfgiants tend to be friendly and eager to please, adopting the lifestyles, skills, and values of those they admire. A half‐giant character who encounters a new situation looks
around him to see what other people are doing. For example, a half‐giant character that happens upon a Dwarven stone quarry may watch the dwarves, and then start quarrying stone himself. If he can make a living at it, he will continue to quarry stone just like his neighbor dwarves do; otherwise he will move on to something else.

Half‐Giant Lands
Half‐giants are most often found in the city‐states, serving as gladiators, laborers, soldiers,
and guards. A few half‐giants collect into wilderness communities, often adopting the culture and customs of neighboring beings. The rare half‐giant community often attaches itself to a charismatic or successful leader (not necessarily a half‐giant) who demonstrates the tendencies they admire.

Psionics
While a single–classed half‐giant psion is very rare, some half‐giants take the path of the psychic warrior, becoming killing machines that can take apart a mekillot barehanded.

Religion
Half‐giants do not display any affinity for the worship of one element over another.

Language
All half‐giants speak the Common speech of slaves. Whatever tongue she speaks, the half‐giant’s voice is pitched so low as to occasionally be difficult to understand.

Names
Enslaved half‐giants often have human names, and because of this they vary greatly. Free halfgiants are likely to borrow the naming conventions of the race or people they are imitating at the time their child is born.

Adventurers
Half‐giants are usually led to adventure by interesting companions of other races.

Half-Giant Society
A relatively young race, half‐giants possess very little cultural identify of their own. Instead they adopt the customs and beliefs of those other cultures in which they live. Because of this, half‐giants routinely change their alignment to match those around them who most influence them.

Half‐giants can be found from one end of the Tablelands to the other, and often congregate in or near other population centers, absorbing the culture. Rarely do half‐giants form communities of their own. Unlike some other bastard races, half‐giants can reproduce. A single off‐spring is produced from half‐giant unions after almost a year of pregnancy. Though omnivorous, half‐giants are tremendous consumers of water and food. They require twice the amount of food and water than humans. Clothing and equipment need twice the material to construct to fit a half‐giant, leading to higher prices for half‐giants.
Half‐giants tend to damage objects and buildings around them through accidents of size alone. Some considerate half‐giants camp outside city walls to avoid causing too much damage, but the draw of a city’s culture and the below average intellect of most half‐giants limits the number of half‐giants who do so.

Roleplaying Suggestions
Always remember how much bigger and heavier you are than everyone else. Take advantage of your height in combat, but remember the disadvantages. Between your size and your lesser wits (even if you are a relatively intelligent half‐giant people will assume you to be dull), you find yourself an object of comic relief. You are used to being teased and will endure more witty remarks than most people, but when you have been pushed too far your personality can suddenly shift, and you can unleash astonishing violence on your tormentors and any who stand in your way. Less frequently, these shifts can happen to you without provocation―you just wake up with a different ethos and altered disposition. Remember you are influenced by powerful personalities, and can shift your personality and ethics. You tend to imitate the tactics, clothes and demeanor of your “little master.”

•Ability Score: Half-giants are renowned for their great strength and dull wits. Half Giant’s receive receive +8 Strength, +4 Constitution, -2 Dexterity, -4 Intelligence, -2 Wisdom, -and -2 Charisma.
• Type: Half-giants are obviously giants.
• Size: Giants are large creatures, and therefore take up a space that is 10ft by 10ft and have 10 ft reach. They also suffer a -1 size penalty to AC; a -1 size penalty to attack rolls; a +1 bonus to their CMB and CMD; and a -4 penalty to stealth checks.
• Base Speed: (Quick) Half-giant base land speed is 40 feet.
• Languages: Half-giants begin play speaking Common. Half-giants rare enough to have high Intelligence scores can choose from the following: Common, Dwarven, Elven, City State Dialect, Saurian, and Terran. See Linguistics for more information about these languages.
• Natural Armour: +2 natural armour to AC
• Adaptable Aptitude: A Half-giant can choose a favoured class bonus from any race that is part of the party at the time he levels up. At first level he must choose a favoured class bonus from the Human list.