“Be wary of the forest ridge. The halflings who live there
would as soon eat you alive as look at you. Chances are
you won’t even notice them until you’ve become the main
course.”
―Mo’rune, half‐Elven ranger 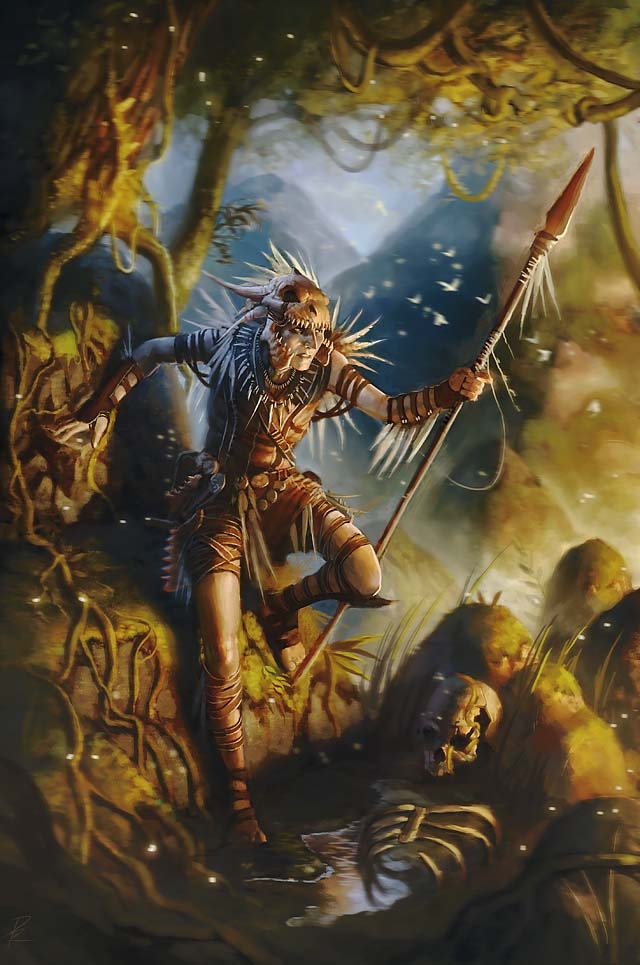 Halflings are masters of the jungles of the Ringing Mountains. They are small, quick and agile creatures steeped in an ancient and rich culture that goes back far into Athas’ past. Although they are not common in the Tablelands, some halflings leave their homes in the forests to adventure under the Dark Sun. As carnivores, halflings prefer to eat flesh raw.

Personality
Halflings have difficulty understanding others’ customs or points of view, but curiosity helps some halflings overcome their xenophobia. Little concerned with material wealth, halflings are more concerned with how their actions will affect other halflings.

Physical Description
Halflings are small creatures, standing only about 3 1/2 feet tall and weighing 50 to 60 pounds. Rarely affected by age, halfling faces are often mistaken for the faces of human children. They dress in loincloths, sometimes with a shirt or vest, and paint their skins with bright reds and greens. Forest halflings rarely tend to their hair, and some let it grow to great lengths, though it can be unkempt and dirty. They live to be about 120 years old.

Relations
Halfling’s culture dominates their relations with others. They relate very well to each other, since they all have the same cultural traits and are able to understand each other. Halflings of different tribes still share a tradition of song, art and poetry, which serves as a basis of communication. Creatures that do not know these cultural expressions are often at a loss to understand the halfling’s expressions, analogies and allusions to well–known halfling stories. Halflings can easily become frustrated with such “uncultured” creatures. They abhor slavery and most halflings will starve themselves rather than accept slavery.

Halfling Lands
Halflings villages are rare in the tablelands. Most halflings live in tribes or clans in the Forest Ridge, or in the Rohorind forest west of Kurn. Many dwell in treetop villages. Non–halflings typically only see these villages from within a halfling cooking pot.

Magic
Many halfling tribes reject arcane magic. Tribes that accept wizards tend to have preserver chieftains. Only renegade halfling tribes are ever known to harbor defilers.

Religion
Halflings’ bond with nature extends into most aspects of their culture. A shaman or witch doctor, who also acts as a spiritual leader, often rules their clans. This leader is obeyed without question. Halfling fighters willingly sacrifice themselves to obey their leader.

Adventurers
Exploring the Tablelands gives curious halflings the opportunity to learn other customs. Although they may at first have difficulty in understanding the numerous practices of the races of the Tablelands, their natural curiosity enables them to learn and interact with others. Other halflings may be criminals, renegades or other tribal outcasts, venturing into the Tablelands to escape persecution by other halflings.

Halfling Society
Most halflings have a common outlook on life that results in considerable racial unity across tribal and regional ties. Rarely will one halfling draw the blood of another even during extreme disagreements. Only renegade halflings do not share this racial unity, and are cast out of their tribes because of it. Halfling society is difficult for other races to understand, as such concepts as conquest and plundering have no place. The most important value in halfling society is the abilities of the inner self as it harmonizes with the environment and the rest of the halfling race. Halflings are extremely conscious of their environment. They are sickened by the ruined landscape of the Tyr region and desperately try to avoid having similar devastation occur to their homelands in the Forest Ridge. Most halflings believe that care must be taken to understand and respect nature and what it means to all life on Athas.

Halfling culture is expressed richly through art and song. Story telling in which oral history is passed on to the next generation is an important part of each halflingcommunity. Halflings rely on this shared culture to express abstract thoughts and complicated concepts. This causes problems and frustration when dealing with nonhalflings. Typically halflings assume that whomever they are talking to have the same cultural background to draw upon, and find it difficult to compensate for a listener who is not intimately familiar with the halfling history and “lacks culture.” Generally open‐minded, wandering halflings are curious about outside societies and will attempt to learn all they can about other cultures. Never, will they adopt aspects of those cultures as their own, believing halfling culture to be innately superior to all others. Nor do they seek to change others’ culture or views. While halflings are omnivorous, they vastly prefer meat. Their meat heavy diet means that halflings view all living creatures, both humanoid and animal, as more food than equals. At the same time, most halflings believe that other races have the same perception of them. As a result, halflings are rarely likely to trust another member of any other race.

Roleplaying Suggestions
Remember to consistently take your height into account. Role–play the halfling culture described above: eating opponents, treating fellow halflings with trust and kindness, suspicion of big people, and general lack of interest in money.

• Halflings are quick and stealthy, but weaker than humans. Their sophisticated culture makes them wise and empathic.–2 Strength, +4 Dexterity, Wisdom +2, Charisma +2.
• Halflings receive a –2 penalty to all Diplomacy skill checks when dealing with other races.
• Size: Halflings are Small creatures and gain a +1 size bonus to their AC, a +1 size bonus on attack rolls, a –1 penalty to their CMB and CMD, and a +4 size bonus on Stealth checks.
• Base Speed (Slow Speed): Halflings have a base speed of 20 feet.
• +2 racial bonus on Climb, Acrobatics and Stealth checks: Halflings are agile.
• +2 racial bonus on saving throws against spells and spell‐like effects.
• +1 racial attack bonus with a thrown weapon: javelins and slings are common weapons in feral halfling society, and many halflings are taught to throw at an early age.
• +4 racial bonus on Pereption checks: Halflings have keen ears. Their senses of smell and taste are equally keen; they receive a +4 to all checks that assess smell or taste.
• Poison Use: Halflings are adept at using poisons and never risk accidentally poisoning themselves.
• Bonus Feat: Halflings gain a bonus feat.
• Automatic Languages: Halfling. Bonus Languages: Common, Dwarven, Elven, Gith, Kreen, Rhul‐thaun, Sylvan, and Yuan–ti.
• Favored Class: Ranger. A multiclass halfling’s ranger class does not count when determining whether he takes an experience point for multiclassing.