“People are no good. You can only trust animals and the
bottle.”
―Delmao, half‐Elven thief 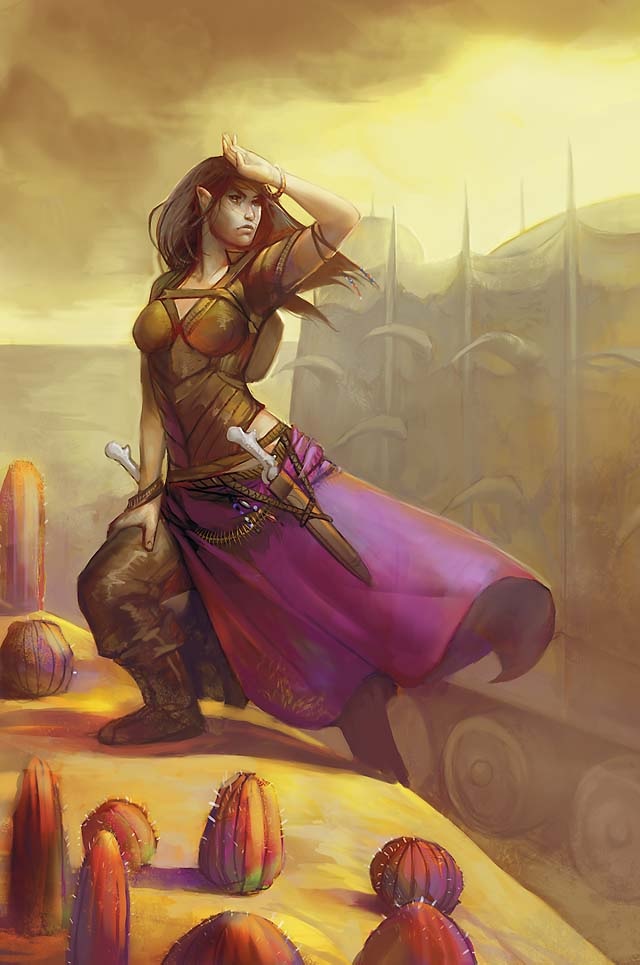 Unlike the parents of muls, elves and humans are often attracted to each other. Half‐elves are typically the unwanted product of a casual interracial encounter.

Personality
Half‐elves are notorious loners. Many Athasians believe that half‐elves combine the worst traits of both races, but the most difficult aspect of half‐elves – their lack of self–confidence – comes not from their mixed origins but rather from a life of rejection from both parent races. Half‐elves try in vain to gain the respect of humans or elves.

Physical Description
Averaging over six feet tall, half‐elves combine Elven dexterity with human resilience. Bulkier than elves, most half‐elves find it easier to pass themselves off as full humans than as full elves, but all have some features that hint at their Elven heritage.

Relations
Humans distrust the half‐elf’s Elven nature, while elves have no use for their mixed–blood children; Elven traditions demand that such children be left behind. Human society gives half‐elves have a better chance of survival, but even less kindness. Half‐elves sometimes find friendship among muls or even Thri‐kreen. Half elves will cooperate with companions when necessary, but find it difficult to rely on anyone. Many half‐elves also turn to the animal world for company, training creatures to be servants and friends. Ironically, the survival skills and animal affinity that half‐elves developed to cope with isolation make them valuable beast handlers in human society.

Alignment
Lawful and neutral half‐elves labor for acceptance from a parent race, while chaotic ones have given up on acceptance, electing instead to reject the society that has rejected them.

Half‐Elven Lands
Despite their unique nature, halfelves don’t form communities. The few half‐elves that settle down tend to live among humans who, unlike elves, at least find a use for them.

Magic
Half‐elves often take up arcane studies, because it is a solitary calling.

Psionics
Mastery of the Way often provides the independence and self–knowledge that half‐elves seek, and membership in a psionic academy can provide the half‐elf with acceptance.

Religion
Because of their alienation from society and their affinity with animals, half‐elves make excellent druids. Some half‐elves turn their resentment of society into a profession and become sullen, bullying templars. As clerics, they are drawn to water’s healing influence.

Language
Half‐elves all speak the Common tongue. A few half‐elves pick up the Elven language.

Names
Half‐elves nearly always have human names. Unable to run as elves, they never receive Elven given names, or acceptance in an Elven tribe that they could use as surname.

Adventurers
In a party, half‐elves often seem detached and aloof.

Half-Elf Society
Unlike other races, half‐elves do not consider themselves a separate race, and, with very few exceptions, do not try to form half‐Elven communities. A half‐elf’s life is typically harder than either a human’s or an elf’s. It is difficult for half‐elves to find acceptance within either Elven or human society. Elves have not tolerance for those of mixed heritage, while humans do not trust their Elfish side. On the whole, humans are far more tolerant of half elves than elves, who often refuse to allow such children into their tribes, and are likely to cast the half‐elf’s mother from the tribe as well. Most half‐elves consider themselves outsiders to all
society and tend to wander throughout their entire lives, going through life as an outsider and loner. Half‐elves are forced to develop a high level of self‐reliance. Most half elves
take great pride in their self‐reliance, but this pride often makes half‐elves seem aloof to others. For many half‐elves the detachment is a defensive mechanism to deal with a desire for acceptance from either human or Elven society that will likely never come. Some half‐elves turn to the animal world for company, training creatures to be servants and friends.

Roleplaying Suggestions
Desperate for the approval of either elves or humans, you are even more desperate to appear independent and self–reliant, to cover your desire for approval. As a result, you tend towards a feisty, insecure, sullen self–reliance, refusing favors. You take every opportunity to show off your skills in front of elves and humans, but if an elf or a human were to actually praise you, you would probably react awkwardly or suspiciously. From your childhood, your closest friendships have been with animals. Other half‐elves do not interest you. As time goes by and you learn from experience, you will find that you can also get along with other races neither human nor Elven: dwarves, pterran, muls, even thri‐kreen. You don’t feel the terrible need for their approval, and yet they give it more readily.

• Ability Scores +2 Dexterity, -2 Charisma and +2 to two other stats. Half‐elves are limber like their Elven parents, but their upbringing leaves them with a poor sense of self, and affects their relations with others. They still retain some of the flexbility of their human parentage though.
• Humanoid (elf): Half‐elves are humanoid creatures with the elf subtype.
• Medium: As Medium creatures, half‐elves have no bonuses or penalties due to size.
• Half‐elf base land speed is 30 feet.
• Half‐elves have low‐light vision as described in the Player’s Handbook.
• Half‐elves gain a +2 racial bonus to Disguise checks when impersonating elves or humans.
• +1 racial bonus on Perception checks. Half‐elves have keen senses, but not as keen as those of an elf.
• +2 racial bonus on all Survival and Handle Animal checks. Half‐elves spend a lot of time in the wilds of the tablelands.
• Companion: A half elf begins play with an animal companion as a druid of its level. If the character is already entitled to an animal companion because of its class features it gains a +3 bonus to the effective druid level for that companion.
• Bonus Feat: Half elves gain a bonus feat.
• Elven Blood: For all effects related to race, a half‐elf is considered an elf. Half‐elves, for example, are just as vulnerable to effects that affect elves as their elf ancestors are, and they can use magic items that are only usable by elves.
• Automatic Languages: Common and Elven. Bonus Languages: Any.
• Favored Class: Any. When determining whether a multiclass half‐elf takes an experience point penalty, his highest–level class does not count when determining whether he takes an experience point for multiclassing.